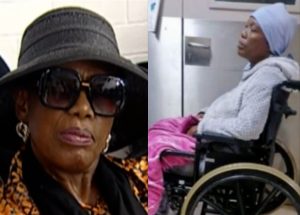 Who is Zamanguni Gumede, Mampintsha’s Mom? She was a South African woman, who was best known as the mother of the late Gqom singer, Mampintsha who died just some weeks ago.

There have been no much information about the life and childhood of Mampintsha’s mom, neither do we know about her siblings.

From the profile of Mampintsha, we can tell that his mother was probably from Umlazi in KwaZulu-Natal, South Africa or she once lived with her family there.

Asides having his son, Mampintsha whom we all know, she also survived by a daughter (Mampintsha’s sister) whose name is not ascertained yet.

The nature of her job was not certain, and we are not sure she occupied any official position or owned any business of her own.

The biological name of Mampintsha’s Mom was ZamaNguni Gumede. She was the mother of the Kwaito singer.

ZamaNguni Gumede died at the age of 64.

She was born in the year, 1959, but the birth month and date are not certain.

Tragedy has again fallen on the Gumede family. ZamaNguni Gumede who was known to be the mother of the Gqom singer Mampintsha has died. According to an online report, Gumede died on Sunday, 15th January 2023 at Wentworth Hospital.

Mampintsha’s sister confirmed the publication and confirmed her mother passed away as a result of stroke which she already had.

It is still a hard time for the family as ZamaNguni Gumede’s death comes to the family at a wrong time, the family are not yet over the loss of Mampintsha, whose real name is Mandla Maphumulo. He died in December 2022, last year.

Gumede’s daughter revealed how she feels about her mother’s sudden death, she said, “Now that she’s gone, I can see that she wanted to bid farewell to us. She told me she was old and that she was leaving. She asked if everyone was around and I said yes. She wanted to see Sponge, Mampintsha’s son and I told her he was not around. I could see the sadness in her eyes and she did not say anything. She gave us her blessing and we spent some time with her. We then left. At about 10h00 I received a call informing me that she is dead,” Gumede said.